Alemany I Corrio are back

The husband and wife wine making team of Irene Alemany and Laurent Corrió burst on the scene with legendary ‘garagiste’ wine Sot Lefriec in 1999. A blend of cabernet sauvignon and merlot with local cariñena, was dubbed the “jewel of the Penedès” by the Spanish wine press and became a benchmark for the region. They followed it up with two more stunning vintages of this wine, which augmented their status as one of the rising stars of the region.

Wine making in the region would appear to have been introduced by the Phoenicians, archaeological evidence indicates that they traded ancient Catalan wines with the Egyptians many hundreds of years before the Romans arrived. However it was the Romans that were the major influence on wine making, especially around Tarragona, which was the Roman capital of occupied Spain. With the fall of the Roman Empire in the 4th century and the subsequent conquest by the Moor saw a curtailment in Catalan wine production for several hundred years.

The turning point for the Cataln wine industry came in the 19th century with the phylloxera epidemic that ravaged vineyards in Northern Europe, especially France. It was here that Catalan wines become increasingly popular for thirsty Frenchmen starved of domestic wines to drink. During the 1960s and 1970s the Penedès prided themselves on their modern approach to wine making and it was they that led the industry’s technical revolution, being the first region to adopt the use of temperature controlled stainless steel fermentation tanks and the planting of French varieties such as Chardonnay and Cabernet Sauvignon. It was the wine maker Miguel Torres Jr, who strode the region like a colossus. He returned from studying wine making in France in the 1960s and was a major influencing factor on this revolution. Today it is Bodegas Torres which is the largest winery of the central Penedès, situated in the regions capital Vilafranca del Penedès.

It was here that Irene Alemany grew up, watching her grandfather make wine and fuelled her desire to follow a similar path. After studying enology in Spain she spent some time working in Burgundy, where she met Laurent Corrió. Burgundy had a huge impact on her wine making ethos. The couple then spent some time working in California, with the idea of returning to France at some stage. However it was Irene’s father who convinced them to bring the wine making skills that they had developed back to the Penedès and to see what they could do with some old family vines.

So they set up their ‘garage winery’ in Irene’s fathers 200 square metre workshop in the shadow of Bodegas Torres. Immediately they set about doing everything in a Burgundian manner, especially using indigenous yeasts, hand harvesting and de-stemming. These methods certainly raised some eyebrows with the locals. One particular story Irene likes to recount is that during their first green harvest her farther received numerous phone calls from concerned locals saying ‘Your daughter is leaving half the vineyard on the ground!’ However after the international acclaim that came with their first vintage the sceptical locals were soon won over.

However, as in life things don’t always go according to plan. After the International acclaim garnered for their first three vintages of their flagship wine Sot Lefriec things took a turn for the worst. The subsequent 2002 and 2003 vintages unfortunately didn’t live up to the high standards set by their inaugural vintage and as a consequence they fell off the Gauntleys radar, until now. The 2007 Sot Lefriec has seen Irene and Laurent recapture their mojo and this wine can be seen as a worth successor to the 1999 vintage. It is a dense rich and concentrated wine that has the tannic structure to reward long term cellaring

The grapes were hand harvested and rigorously sorted, so that only those grapes that had a achieved maximum phenolic ripeness were used. After de-stemming and 5 days cold maceration the juice was fermented in stainless steel tanks. Each variety is vinfied separately with regular maceration and pumping over. After an 18 to 40 day fermentation the wine is given a malolatic fermentation in used French oak barrels before being aged for a further 18 months in 70% new French Oak and 30% used French Oak. After blending the wine is then given a further 3 years ageing in bottle before being released.

Irene and Laurent’s second wine is called Pas Curtei. For me it is a perplexing wine. I have often found it to be overly tannic and although well made it often lacks the softness that I would like to see from an early drinking wine. However with the 2011 I believe that they have found the perfect balance between softness of fruit and tannin. Yes there is still a fair degree of tannin, but I think that with what appears to be a little more new oak and an excellent concentration of fruit makes this vintage an ideal one to consume whilst waiting for the Sot Lefriec to mature and soften.

So on to the 2011 Principia Mathematica, which is not named after the iconic three volume work Philosophiæ Naturalis Principia Mathematica (Mathematical Principles of Natural Philosophy) published by Sir Isaac Newton in 1687. Nor is it named after the three volume work on the foundations of mathematics written by Alfred North Whitehead and Bertrand Russell, which was published between 1910 and 1913 In fact the name of the wine comes from an even more obscure source, unless you are a fan of Àlex Torío, the Barcelona based ‘experimental’ musician! His album Principia Mathematica was released in 2010, which incidentally was the first vintage of this wine and the bottle bears a copy of the album artwork. Apparently he is one of Irene and Laurent’s favourite Spanish artists.

The wine itself is made from a single parcel of Xarel Lo vines which are around 30 years old. Just like their red varieties the Xarel Lo vines are green harvested when needed in order to reduce the yields and increase phenolic concentration. Once harvested the grapes are subjected to immediate pneumatic pressing and overnight cold settling. Fermentation takes place in new French oak barrels of 228 and 700 litres and then a third of the wine is then aged for 6 months in stainless steel ‘sur lees’ with the remaining two thirds aged in oak barrels with occasional battonage. This has resulted in a wine that possesses a wonderful freshness along with a subtle oak character. Personally I believe that it showcases their distinct Burgundian style to the maximum. Indeed the nose has a very distinct Meursault like butteriness, whilst the palate displays a lovely minerality and nutty disposition. 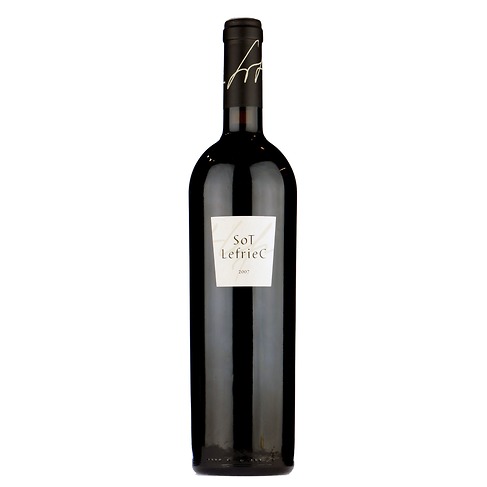 Deep aromas of smoky oak, blackcurrant/ cherry with hints of herbs, liquorice and a vibrant minerality.

Dry, soft acidity, medium to high fine grained tannins. A dense, concentrated, chewy mouthful of a wine with blackcurrant/ cherry and integrated toasty oak. Wonderfully deep with hints of dark chocolate and minerals. Very long with a touch of camphor-like herbs in the finish. The tannins currently mask the finish a little, so it will require cellaring. (CG)

In stock
£32.34
Be the first to hear about our wine tasting events, offers & new imports
Join thousands of other wine lovers & subscribe to get news about our latest offerings, new vintages and tastings delivered straight to your inbox