shopping_cart
Since 1990, when Jean-Paul Daumen took over from his father, the rise in quality of wine from this domaine has been extraordinary. Situated in the northern sector of the appellation, in the area known as Cabrieres, Jean-Paul owns and runs 32 hectares of vines of which eleven are in Chateauneuf-du-Pape. The cepage, whilst predictable, contains a healthy proportion of Mourvedre (around 10%) which is slowly being augmented with new plantings. The vines have a good age, being between 50 and 90 years old. Production here is small with 4,500 cases annually of which over two-thirds are Cotes du Rhone and vin de pays. Like my visit with Roger Sabon this was my first time here and the order and professionalism that Jean-Paul brings to the property immediately struck me. Since 1990 there have been many changes. Not only a new ageing cellar has been built, but some interesting decisions to improve the quality of the wines have been taken as well and the estate is now completely biodynamic. Almost the entire crop is de-stemmed and experimentation with a variety of small casks more or less new is being carried out. Jean-Paul believes, however, in "emphasising the fruit and the balance more than the wood". Nevertheless, I feel sure that there was a tinge of pride in his voice when he showed me his selection of barrels from Chateau Margaux! (an original chat-up line if ever there was one).

One of the most interesting aspects is that all the grape varieties are vinified separately, which is rare in this region, with an assemblage carried out post fermentation. It is at this stage that a rigorous selection policy is carried out.No sulphur is used during the vinification process. The wines are fermented for around a month and remontage is performed four times each day. After elevage, in a combination of tank and barrel, - no new oak and all his wines are bottled without filtration.

Whilst it could be considered that the wines of Vieille Julienne are in the 'classic mould' of Chateauneuf-du-Pape they generally possess an elegance and are overtly fruity in nature. If one looks at our little journey around the properties it could be argued that Domaine du Pegau and Vieille Julienne are entirely opposite in style while both being of supreme quality.
Order by 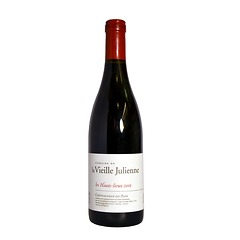 in stock - only one bottle remaining!

Be the first to hear about our wine tasting events, offers & new imports
Join thousands of other wine lovers & subscribe to get news about our latest offerings, new vintages and tastings delivered straight to your inbox