The Best of Beaujolais Mixed Case

This is a six-bottle mixed case, containing 2x each of the following wines:

Our ‘Best of Beaujolais’ mixed case hopes to show you just a few of the great, characterful, and soulful wines that are being produced in and amongst the different crus of Beaujolais. The boom of Beaujolais Noveau, led to the overuse of chemicals and pesticides in vineyards all over the region, in order to consistently produce a homogenised and simple style of wine. However, this scouring of the vineyards, left the land and the wines lifeless and without identity, or soul. The winemakers we bring to you today, are amongst those fighting to regain the identity of the wines of Beaujolais, bringing life and personality back to their vineyards, and to their wines. These are serious wines, that should be decanted in order to truly experience all that the wines have to offer. This is Beaujolais as you have never tasted it before!

The Morgon Vieille Vigne, comes from vines averaging over 70 years old, and is aged entirely in the old oak foudre. It is sumptuous and elegant, with light touches of pepper. Luscious deep cherry, raspberry, strawberry and plums come through clearly on the palate and the complimentary tannins are silky and soft, with lovely minerality and life. Wonderfully balanced and expressive.

The ‘Champs de Cour’ is superb with hints of violets and roses complete with a wonderful complexity and more than a passing resemblance to Pinot Noir. Wonderful clarity and direction results in an approachable Beaujolais with far more depth and complexity than your standard Moulin a Vent! Even the Wine Advocate agrees, rewarding the 2013 Champ de Cour 93 points and saying ‘if you’ve not tasted Richard’s wines before then do yourself a favour’.

The 2013 Cuvee de Fous is 100% destemmed and made from vines that are over 100 years old. This is the most introspective and intriguing bouquet on the nose of his range. Blackberry, briary fruit are accompanied by limestone and flinty notes. The medium bodied palate is laced with supple and smooth tannins, surrounded by a core of very dark and pure berry fruits. Its sublime, the balance of tension and release, weight and levity. This is one of the finest examples of Beaujolais from Brouilly you will come across.

UK delivery
We deliver to most of the UK within one to two working days using specialist wine couriers London City Bond.

Click and collect not available for wine
Wine is shipped directly from our bonded warehouse so unfortunately you can't use Click and Collect for wine.

Delivery options
At the checkout you can leave instructions for the courier to deliver to a neighbours address or left in a safe place around your home if you are out. You can also send to an alternative address such as your work.

Delivery outside the UK
For all delivery destinations outside of the UK - although your order is not subject to UK VAT it will be subject to the local taxes and duties of your country. These charges are usually levied once the package reaches your country. Any additional charges for customs clearance must be borne by you; we have no control over these charges and cannot predict what they may be. Customs policies vary widely from country to country, so you will need to contact your local customs office if you require further information. 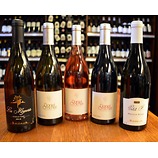 Gauntleys Mixed Wine Cases Bringing Back the Bubbles 12
£239.40
ON OFFER There’s No Place Like Rhône - Part 2
£99.63
ON OFFER
Be the first to hear about our wine tasting events, offers & new imports
Join thousands of other wine lovers & subscribe to get news about our latest offerings, new vintages and tastings delivered straight to your inbox