shopping_cart
We're still taking online orders for delivery. The shop is currently open for PRE-ORGANISED COLLECTIONS ONLY, Monday, Wednesday, Thursday & Friday 10am to 4pm.
Order online for delivery or to collect, or call 0115 911 0555, or email (N.B. Please wait for a confirmation email before visiting to collect orders).

In 2002 the Porter family emigrated to New Zealand and purchased a sheep farm called ‘Waiora’ (a Maori word meaning ‘healthy water’). The property was renamed bellbird spring after an indigenous honey eating bird and the fact that a natural spring lies on the property. Here they planted the 5.2 hectare ‘Home Block’ vineyard with the staple New Zealand variety – Sauvignon Blanc. However 1 hectare was set aside for planting with the Alsatian varieties of Riesling, Pinot Gris, Gewurztraminer and Muscat Ottonell.

Bellbird spring is truly a family affair with Tom and Sheila producing extra virgin olive oil from grove on the property. Their daughter Alex, runs the companies office whilst their son Guy, a winemaking graduate of Adelaide University, managers the vineyard and makes the wine.

Lying 60 kilometres north of Canterbury in New Zealand’s south island, the Wiapara valley enjoys a cool climate with low rainfall and long, sunny autumns. This allows the grapes to fully ripen during a long growing season, which bares a similarity to the Alsace region, hence why they chose to plant these varieties. The soil is classical alluvial. Poor and free-draining thus restraining vine vigour and keeping yields low.

Each variety is hand harvested at its optimum ripeness. 2008 suffered from a particularly cool autumn, thus the Riesling was the first variety to be picked in early April and the harvest was finished with the Pinot Gris on the 8th May, with snow flecking the surrounding hills! Guy utilises full bunch pressing and each variety is fermented separately in old barrique with regular battonage and four months lees aging. This lees contact encouraged the second, softening malolactic fermentation in a proportion of the Pinot Gris adding a rich, creamy texture to the wine. Guy’s wine making philosophy is very traditional and fermentation was allowed to run its course naturally leaving around 20 g/l residual sugar in the finished wine.

For this inaugural vintage he took inspiration from the talented Alsatian winemaker Marcel Deiss. Guy wanted to create a ‘vin de terroir’ but unlike Deiss he decided not to make a ‘field blend’ as he wanted greater control over the composition of the finished wine. I believe that he has achieved an excellent balance of these varieties. The Pinot Gris (which makes up around 60% of the wine) along with the Muscat gives the wine a firm, fruity base. The Riesling adds a floral character and the Gewurztraminer brings it’s spiciness to the party.
Order by 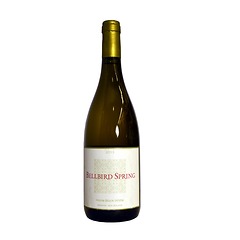 Bellbird Spring
Home Block White 2013
Bottle: £23.98
Case of 6: £128.95
Be the first to hear about our wine tasting events, offers & new imports
Join thousands of other wine lovers & subscribe to get news about our latest offerings, new vintages and tastings delivered straight to your inbox