Celler del Pont makes a wine called Lo Givot which is one of the new superstars of Priorat. Rated for the first time by Parker with 95 points and cited by Jancis Robinson as one of her 6 favourite Priorats. The winery is similar to that of Sot Lefriec in that it can be thought of as a 'garage' winery. In fact the wines are made in the tiny basement of an elegant old village house situated amid the impossibly tight, winding streets of Vilella and you would have no idea when passing that such a great, modern wine is produced in such a place.

The vineyards are owned by Francisco "Cisco" Fernandez and the wines are made by his partner Montse Nadal, a warm, friendly, young woman who is also teacher of viticulture at the Oenology Faculty of Tarragona University. The Domaine comprises 3 parcels of vines over just 5 hectares which end up yielding as little as 15 hl/ha. There is 1 hectare of Grenache vines which are over 50 years old and 0.5 hectare of 15 year old vines. 2.5 hectares of Carignan vines which are again over 50 years old. 0.5 hectare of 20 year old Cabernet Sauvignon vines and 0.2 hectare of 14 year old Syrah vines.

The vines are grown mainly on schist soils on hillsides around Vilella Baixa at 150 to 200 metres altitude. The schist gives the wines terrific minerality.

The finished wine is assembled from the following: 33% Grenache; 32 % Carignan; 25% Cabernet Sauvignon; 10% Syrah. Once fermented, the wine is transferred to barrels of French (92%) and American (8%) oak, where it is aged for between 12 and 14 months. After this period, blending is carried out in accordance with the results of tasting and it is placed in stainless steel vats for subsequent bottling. The wine is then given a further 6 months in the bottle before being released.

The work in the vineyard is organic and almost all carried out by hand. It is not so difficult to understand why the price is high given the work involved in cultivating the vines and the yields achieved. The wine is made very naturally using a mix of traditional and modern methods but with as little interference and as gently as possible. The wine is bottled without fining or filtration.
Order by 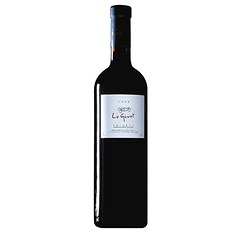 Cellar del Pont
Priorato, Lo Givot Magnum (150cl) 2004
£95.50
Be the first to hear about our wine tasting events, offers & new imports
Join thousands of other wine lovers & subscribe to get news about our latest offerings, new vintages and tastings delivered straight to your inbox