Clos des Trias is comprised of 19 hectares, with a healthy share of 80+-year-old vines in microbial rich Triassic soils. The vineyards are situated high in the hills at 300-500 meters above sea level, allowing them to escape much of the exhaustive heat that their lower altitude neighbours experience. To extract the most from his stunning terroir, Even employs the most natural, non-interventionalist methods of winemaking possible. The winery was officially certified organic in 2012 and also follows many biodynamic principles. Even relies on spontaneous fermentation, with no addition of yeast, or temperature control and keeps sulphur levels to a minimum. The wines are truly allowed to ‘make-themselves’. Some of his reds are aged for up to 6 years in old oak fourdre, yet still the minerality, concentration, life and perfume the wines exhibit is somewhat bewildering, and simply a testament to Even’s understanding of his land and vines.

His range has some staples, including his straight Ventoux rouge, which has a wonderful garrigue character, perfume and minerality, accompanying plenty of ripe red fruits and black plums. Following the same direction as the basic Ventoux, but with more intensity, the beautifully complex Vieilles Vignes possesses glorious hints of liquorice and black olives. In addition, in the greatest vintages, (approximately every few years), Even also releases, the extraordinary single vineyard, ‘Pied Porcher’. 96% of Even’s production is red, however, he has a small production of a truly phenomenal, Ventoux Blanc, from a blend of 80-year-old, Grenache Blanc and Clairette, with approximately two weeks, skin contact and aged for 2 years in large, old oak barrels. This really sings with pure, ripe apples and pears on the palate, accompanied by an attractive oxidative character, a true puissance, minerality and acidity. However, in addition to his regular cuvee’s, because of his constant love of innovation and experimentation, Even will often surprise with exceptional one-off bottlings and new cuvee’s. So keep your eye on the space below! Since its inception, Even has gone on to show that he his undoubtably one of the most intuitive winemakers in the world, producing some of the most individual and delicious wines produced in the Southern Rhône today.
Order by 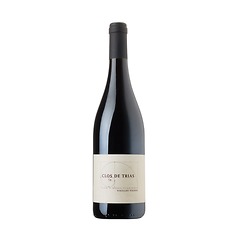 Clos de Trias
Ventoux Pied Porcher Magnums (150cl) 2010
£89.45
Be the first to hear about our wine tasting events, offers & new imports
Join thousands of other wine lovers & subscribe to get news about our latest offerings, new vintages and tastings delivered straight to your inbox