Pegau is an old name in Chateauneuf du Pape. The Feraud family can trace their roots in the Southern Rhone Valley, all the way back to the middle of the 17th century. We have been working with Domaine du Pegau for close to 40 years. Back then, the estate was little known, only a small percentage of the production was bottled at that time, the rest being sold to the negoce. Since then, however, fame and a certain amount of fortune has come to Pegau, with the wines being lorded throughout the world and Pegau widely being regarded as one of the finest producers and biggest names in the region. Yet outwardly nothing has changed. Run by the tenacious and driven Laurence Feraud, who is a fervent proponent of the most traditional wine-making styles of Provence and Rhone. Pegau’s style is a throwback to another era, when the keeping of grape stems for fermentation and long barrel ageing was the norm. Nowadays, few estates in Chateauneuf-du-Pape keep their stems, preferring their wines to be more easily accessible when young. Pegau, is classic old school Chateauneuf-du-Pape at its finest and exhibits a real essence of Provençal garrigue.

To our mind this historic property produces one of the appellation's most complex and concentrated wines. A wine from the 'old school' and proud of it. In the finest vintages Pegau's Chateauneuf-du-Pape will age gracefully for twenty years or more gaining richness and weight; although sometimes I feel it hardly ages at all (the '78 tasted recently was still youthful and majestic). The domaine is owned and run by the rugged, Rugby-loving Paul Feraud with his daughter Laurence.

The property is made up of eleven separate vineyard parcels spread throughout the appellation totalling 18 hectares. The jewel in the estate's crown is a proportion of la Crau to the east, one of the finest vineyard sites. Here many of the vines are approaching their centenary, but as Laurence Feraud is quick to point out, "As good as our piece of La Crau is, we can't really vinify it by itself because the wild yeast on the grapes can't chew through all the sugar".

The red Chateauneuf-du-Pape (a small quantity of white is also produced) is composed of 75% Grenache with 25% Syrah, Mourvedre and Counoise. The family usually harvest late (they didn't complete the '98 harvest until 8th October, which created a problem since all their pickers had returned to college!). The grapes are then carefully selected. After a light crushing they are tipped into the concrete vats without de-stemming. The maceration and initial alcoholic fermentation last about 15 days before the juice is run off and the marc (grape skins) is pressed. The wine is then aged for around 18 months in old oak foudres. No fining or filtration is carried out and a very low amount of sulphur is used during bottling. An assemblage of the various foudres is made after around one year. Wines deemed not good enough are sold off in bulk or assembled into their vin de pays.
Order by 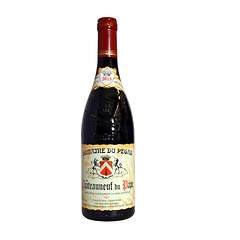 Domaine du Pegau
Chateauneuf-du-Pape 'Cuvee Reservee' 2015
£63.20
Be the first to hear about our wine tasting events, offers & new imports
Join thousands of other wine lovers & subscribe to get news about our latest offerings, new vintages and tastings delivered straight to your inbox