This beautiful, and ultra modern bodega, was created in 2008, and was somewhat of a passion project for acclaimed winemaker, Juan Luis Cañas. Famous for his outstanding Riojas, Juan also has a real passion for the Ribera del Duero region and set himself the challenge of crafting stunning and approachable wines from this region, alongside his longtime friend Juan José Iribecampos. Amalgamating the first two letters of their surnames, they came up with the name ‘Cair’. After searching high and low, they finally found the vineyards of their dreams in the hills, a plot with many Tempranillo bush vines, over 100 years old. The soils and vines give low yields, but incredibly concentrated grapes, full of character. The Cuvee de Cair, is aged in used French and American oak barrels, for 9 months. It later spends at least 6 months in the bottle, to round out its aging. It is a lovely drinking wine, approachable, fresh and morish. It exudes intense, complex and inticing aromas of ripe berry fruit, preserve, raisins and caramel notes. Slight chocolately nuances are joined by hints of jam and sweet spice and a warming, gentley, smokey backbone. The tannins are silky smooth and polished. The two Juans of Dominio de Cair, set out to make a pure, silky, fruity, sweet and all round tasty wine here, that no one would want to put down once they had taken the first sip. In our opinion they definitely succeeded!
Order by 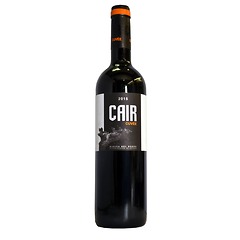 Dominio de Cair
Ribera del Duero Cuvee Cair 2015
Bottle: £21.00
Case of 12: £215.50
Be the first to hear about our wine tasting events, offers & new imports
Join thousands of other wine lovers & subscribe to get news about our latest offerings, new vintages and tastings delivered straight to your inbox